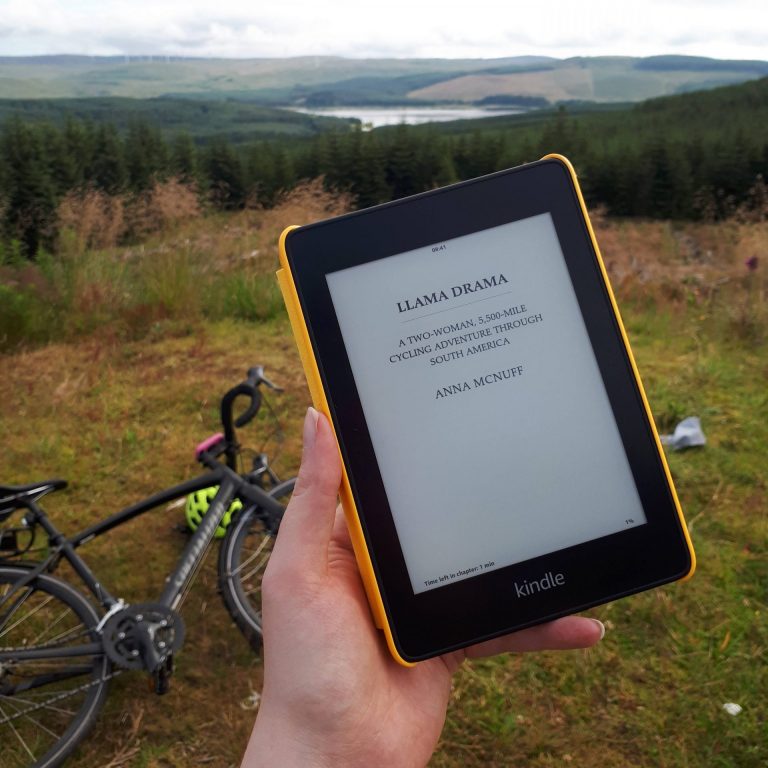 “Oh dear” was not the phrase that went through my head as my bicycle made that set of noises on Thursday night, as I was whizzing a long a narrow country road with lots of twisty turns, still 5 miles and 1700m of ascent away from where I was planning to go to sleep.

A few weeks back, I got an email asking if (as a member of the Adventure Queen mailing list) I would like to receive a copy of Chief-Adventure-Queen Anna McNuff’s latest book in return for a review. Snapped it up! Anna is a relentlessly cheerful adventurer whose mission in life seems to be convincing everyone she meets to dream bigger.

Llama Drama is her account of cycling more than 5,500 miles across (including over 100,000 metres of up!) South America with her friend Faye Shepherd. It is an immense challenge and took the pair six months to complete, along the way they encounter scorpions, lemon pie, Germans and llamas.

The book starts before the adventure, and it helps the whole thing seem more sensible- they start off with a completely bonkers idea and tone it down to become something that could actually happen. It also means we’re there for the pre-adventure jitters and nerves! There’s a good smattering of self help philosophy twisted through the pages and early on Anna introduces her idea of needing to snap the elastic band of comfort we all live inside, to push our limits and ideas. After all, why would you take the flattest most direct route through life, when you could take the wiggliest, most mountainous one possible?

As I was reading it, I was getting sad. I wanted to be outside, watching condors soar above the Andes, having a general direction to aim in and nothing to do but keep pedalling until I got there. I wanted to miss my mum because I was adventuring on the other side of the world, not because she’s shielding at the other end of the M6. Lock down is easing though, and going further than 5 miles from home and camping is now allowed in Scotland. So, with a bit less than half a book to go, I hopped on my bike.

It only seemed fair to aim for somewhere with a hill, the Crow Road just north of Glasgow is one of the best climbs in Scotland, it’s a doable challenge for everyone. Or at least, it should be. Turns out I am nowhere near as fit as I was pre-lock down. That message was really hammered home as I pulled my fully laden self over to the side of the road for a quick round of spew your guts while three extremely expensive sounding sports cars slowed down to purr past me. I didn’t even have the excuse of altitude sickness, I’d just inhaled a kit-kat chunky too fast and then tried to do the steepest section in one go. I was so glad I was by myself when that happened because I couldn’t bear the idea of how much anyone who was with me would have laughed at that moment…

A few miles, a broken spoke, and a few froggy encounters later, I made it up Miekle Bin, snuggled into my bivvy, and read the final chapters under the stars. Chapters that recognised even when you’re doing something exciting and life changing, that you’ve wanted to do for a long time, when it comes down to it sometimes you just have to put your head down and slog it out. The contrast of what starts as epic and becomes routine, stories of gorging on fresh mangos that give way to an audio book club.

Ultimately this book is a love story. Not between Anna and adventure, or the Andes, or even her long distance lover (and soon to be adventure co-parent) but between two friends doing something new and scary for both of them, and getting through it together.

It’s a great book, I highly recommend it if lockdown is getting to you, and you maybe need some inspiration for what you could do next. Don’t be afraid to dream a little bigger! Who knows, maybe covered in dust, sitting on moss, looking at the stars outside a tent, in the Valenzuela Valley is where you will feel most alive.