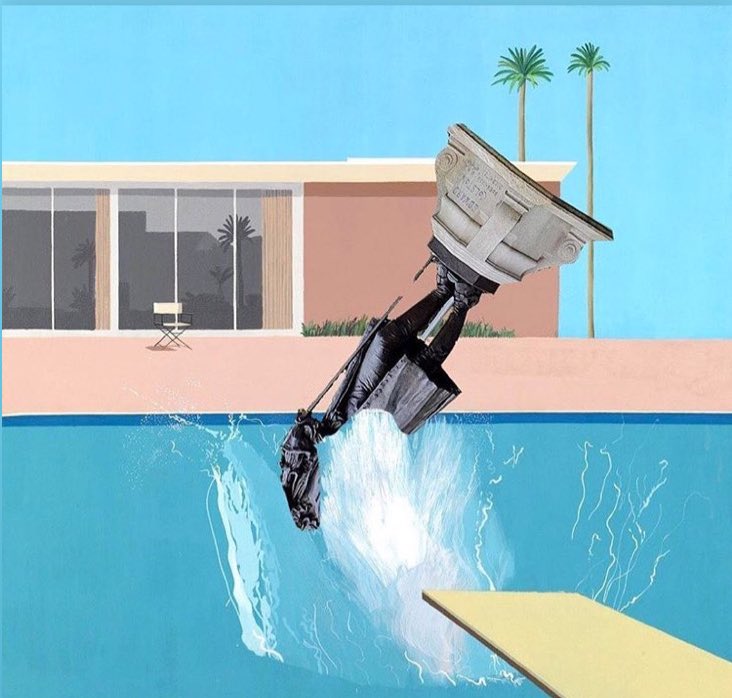 On 7th June, during protests against police brutality following the murder of George Floyd, a statue of Edward Colston in Bristol was toppled, rolled through the city and dumped in Bristol Harbour.

It has provoked a number of opinions.

There is a lot to unpack with this.

There are many issues surrounding the Black Lives Matter movement and the protests that took place in Bristol that I am not qualified to talk about, police brutality, systemic racism, civil disobedience, the nature of protest. I’ve been trying to sit back and listen, to promote other voices, and to educate myself about the new ideas I’ve been exposed to in the last month.1abolish prisons

I have worked in heritage sites for over 10 years now, I have worked with thousands of audiences to deliver the history and heritage of those sites in a meaningful way. I’ve worked on interpretation at sites, for permanent exhibits and pop up events. So I do feel qualified to talk about the role of statues, other symbols in our environment, and the silent stories that they tell.

I use the word stories deliberately. History might include facts about what previously happened, but where it gets interesting and where it gets important is in how those facts are presented. Also, a lot of the time it includes information that is factually inaccurate. Fake news is nothing new. If you think of the information that you’re given by books, newspapers, history teachers, politicians, whoever, as stories it becomes easier to lean back from their authority and to think critically about the ideas they are trying to persuade you of.

The stories we tell of the same events can be massively different. Have you ever played that game where one person finds an object and has to describe it without actually saying what it is, and everyone else has to draw what they think it might be? Or have you seen this page of The Little Prince:

History is no different. Let’s get back to the statue in Bristol.

Actually, no. Before we do that I’d like to make one thing very clear: it is disgusting that the statue has only been taken down this year. It is outrageous that2primarily Black people have to plead, and beg, and finally do the work themselves to stop our public spaces being filled with the names and faces and glorification of those who profiteered from the brutal kidnap, torture, enslavement, and murder of human beings on a global scale.

Hang on a moment, playing Devil’s advocate here! Is it fair to judge others by the moral and ethical standards of today?

To say 300 years ago society was not aware of the immorality of slavery is ridiculous, as an argument it fails because it is primarily concerned with the morality and views of people in a position of power, it is used to excuse the inhuman behaviours of those who benefitted from systematic kidnap and torture. If you went back 300 years and asked a woman who had been kidnapped from her home, forced apart from her family and into shackles then sailed across the planet, stood in a market square while strangers looked her over until one agreed a price to take her to a plantation where she would be beaten, starved, raped, and forced to work until she dropped dead- then she would be able to tell you slavery was wrong.

If you do, for some reason, require the actions of a white man in a position of authority to acknowledge moral precedent: Louis X outlawed slavery in the kingdom of France in 1315.

Don’t be too impressed, he didn’t give a shit what happpened in the colonies.

When people say “I’m glad the debate is happening” or “This is something we shouldn’t rush into, let’s take this opportunity to explore what could happen” the debate they are talking about is “Do living people deserve to feel recognised as human? Is it fair to take down these very public reminders that tacitly celebrate crimes against humanity?”

Does it really matter that much? Yes, and anyone who thinks it’s unimportant shouldn’t mind if the statues of those who were active and willing participants in a vast conspiracy to kidnap children from their families in order to force them into industrial and sexual servitude are dismantled and distroyed.

Most people just walk past them, they don’t actually see them? Bollocks.

Think of your own personal space, the posters that you choose to put on your bedroom walls as a teenager or the knickknacks around your desk in work. Those things were chosen for a reason, because you fancied that film star or adored that band, or you wanted to project a certain sort of aesthetic about what kind of employee you could be. Maybe you have some words of affirmation or a quote that really resonates with you, perhaps it’s even inked on your skin. Now think about how many times you’ve changed those spaces, tidied up or moved out, and think about how often you have found a pile of useless shite and asked what the hell is this still doing here. Or worse, when you’ve looked back at photos and wondered what you were ever thinking. That is what is happening right now, people are looking with fresh eyes and seeing things that have festered too long.

So that statue. It went up because it reflected the kind of image some people in Bristol wanted to celebrate in 1895. They wanted to show they were a town with pedigree, they had rich important people who made money and spent in Bristol going all the way back to the 1600s.3NB we don’t really know how much good work Colston did in his lifetime, although David Hughson wrote that he gave away more than £70,000 he was writing nearly a century after Colston’s death They wanted to draw attention to all the things that had come about because of him (music halls, schools, alms houses, churches) and probably try and motivate some of the rich men4Yes, men, obviously. Women didn’t deserve recognition even if they did have massive fortunes in the 1890s to do the same. By then how the money was made had been, if not exactly hushed up silently agreed to not be talked about not in polite society. I imagine that is why Colston did it in the first place. He changed the narrative, he didn’t give a shit about Black people in his lifetime and he didn’t give a shit what they’d think about him afterwards. But all the places he had his name put upon made sure that all the white people who came afterwards thought of him as a philanthropist before they thought of his crimes against humanity. Why wouldn’t they? No one challenged it, no one kept bringing it up. For Gods sake when slavery ended we paid compensation to the Owners.

When you’ve not talked about something for a few decades then people forget the story, and start telling their own. Colston died in 1721. In 1772 Somerset’s case proved that enslavement was illegal in England. The Slave Trade Act of 1807 outlawed the systematic kidnap and transportation of people in the British Empire. In 1833 the Slavery Abolition Act was passed. By 1895 people weren’t talking about the 84,000 men, women and children whose lives were stolen, or the generations of pain and suffering that came after them, that was something happening somewhere else. Bristol had moved on, it still remembered Colston though- his name was on the streets, the buildings, the schools- he must deserve to be remembered, in fact people should be able to see him.

So, they built a statue. The Anchor Society proposed a statue, the alumni of Colston’s School paid for a statue, the Lord Mayor, Howell Davies, and the Bishop, Charles Ellicott, unveiled a statue. In 1895, that’s 62 years after the Abolition Act which means by the standards of the day (if we take legislation as the only benchmark) those people knew that slavery was wrong, they just didn’t really care.

The statue that stood in Bristol is a bronze sculpture of a white man, stood on a base of Portland Stone 5Portland Stone has been quarried since the Roman times, it has been used extensively including for the London Cenotaph and the United Nations building in New York decorated with bronze dolphins and plaques. Two plaques depict moments of Colston’s life, one is an imagined seascape and the forth plaque reads “Erected by the citizens of Bristol as a memorial to one of the most virtuous and wise sons of their city”.

Most virtuous and wise. Imagine growing up in a town walking past a statue celebrating someone as not only being virtuous and wise, but being the most virtuous and wise person to have come out of the city. Imagine going a school trip to see a play and sitting in a building with names plastered all over the walls and knowing that person was directly responsible for your ancestors being tortured. And if you object, people would shrug. Councillors would suggest a community consultation could be performed, if the funding could be found (shame all that money from the slavers pockets had been spent) and then never getting around to it. Imagine living on a street named after someone who profited not only from the forced labour of treating your ancestors like property, but when that when the laws changed and they could no longer own a human being they were given compensation for the ‘loss’ of property.

Meanwhile 3 years on from the Grenfell Fire where 72 people died, only 14% of the buildings which were built with the same cladding have had it removed, some of the survivors are still living out of hotels or hostels waiting to be rehomed after losing everything in a preventable disaster that took place in one of the richest Boroughs of England6https://www.independent.co.uk/voices/grenfell-fire-anniversary-kensington-coronavirus-bame-boris-johnson-a9565086.html. Then again, they are mostly immigrants, might be different if they were born here.

As a sculpture, I don't hate it. As a statue hon

When I started thinking about a blog I knew it wou

This is a really disappointing decision, that I'm