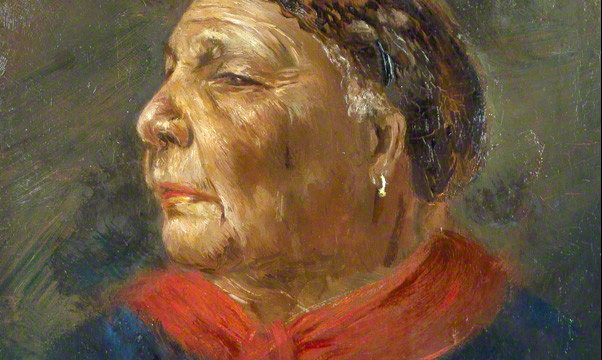 I’ll be honest with you, this entire enterprise was in inspired (in part) by ComedyCentral’s Drunk History. History can be funny, irreverent, full of swears, and still (generally) accurate. It can be enough to give an overview, and maybe inspire someone to look further. So that’s what I did.

I’ll be honest with you, this entire enterprise was in inspired (in part) by ComedyCentral’s Drunk History.

I love the way it proves that history can be funny, irreverant, full of swears, and still (generally) accurate. It can be enough to give an overview, and maybe inspire someone to look further. It inspired me.

In June 2019 they released this video, about how Florence Nightingale went out into the world and Got Shit Done. If you want to learn more about her, go watch the video. For now, I want to talk about one of the women behind Minka Kelly, a quick IMDB search tells me that stood just to her left is Aasha Davies credited in the episode as ‘Various’, and I believe that in this sketch she is a nod to Mary Seacole.

[SIDENOTE: Yes, Drunk History have a range of actors available to fill in scenes and this includes a range of diversities; Comedy Central aren’t going to go out of their way to hire more extras than they need, BUT! the idea that only white people with RP accents existed in The Past is an idea that needs to die in a fire, and even if it is unintentional (which I don’t think it is) I’m glad they aren’t getting caught up in trying to white wash history]

Mary Seacole: born in Jamaica in 1805, her mother 1I say ‘mother’ because it seems as though the detail of her name is information that has been lost to time. Mary wasn’t specific in her autobiography and the other books I’ve read don’t name her. I had a look at Mary’s death certificate, but they don’t record parents details in England. One of the constant reasons we lack information about women is people recording it reduce them. ‘Wife of’ ‘Mother of’ ‘he also had five daughters’., a free woman of colour, was a respected healer who ran a successful hotel in Kingston. Mary’s father was a Lieutenant in the British Army and she remained proud of her Jamaican and Scottish roots throughout her life. Jamaica was not short of local women with local knowledge, in 1780 Cubah Cornwallis had gained fame tending to Horatio Nelson when he took ill in Port Royal. Jamaica in the early 1800s was a British colony, and full of colonial violence, Mary was able to combine her mother’s skills with the practises of the military doctors. At this time slavery was still a regular practise in the West Indies and although there were plenty of doctors, in the early 19th Century their techniques were often questionable: British surgeons didn’t get the memo that washing their hands or even their surgical instruments between patients might be a good idea until the 1860s, and at first they scoffed. Caribbean women relied on anecdotal cures and treatments, and good hygiene practices were an important part of this.

As a teenager she travelled repeatedly to London, and as a young woman Mary worked alongside her mother. In 1851, 7 years after she had lost both her mother and husband, Mary went to Panama to visit her brother, but ended up staying for the duration of a Cholera outbreak- during which she contracted Cholera herself. Her autobiography at this time notes a number of verbal racist attacks, at one party she was toasted by an American man for her usefulness and told “if we could bleach her by any means would…and thus make her acceptable” later as she tried to return home to Jamaica she was refused passage on an American ship.

Her response to the toast was “with respect to my complexion, if it had been as dark as any [redacted2Look, it doesn’t take a lot of imagination to work out what she said but I’m not comfortable typing out ethnic slurs, so I won’t.]’s, I should have been just as happy and just as useful, and as much respected by those whose respect I value” which is a lot more composed than I think I would be in that situation. At her goodbye party before she goes home, man stands up and basically says “Oh thank you so much for saving all these lives, hanging out with sick people until you got sick yourself, you did such a good job and the nicest thing I can think to say is I wish you were white because as it is you’ve got a bit too much melatonin for us to hang out”. I don’t know what happened to him, but I hope it involved impotence and pain.

Around this time the Crimean War was getting warmed up3Russian Empire vs The Ottoman, French, and British Empires; motives: religion and land grabs and the troops that didn’t die on the voyage to the Crimean Peninsula weren’t lasting long once they got there, Florence Nightingale was sent out to try and make the hospitals slightly less dangerous than the front lines. Mary applied numerous times to join her and go out, but a lack of official qualifications made a handy excuse for the racial profiling she received at the hands of the British Army.

Eventually Mary made her own way out to battlefield, she was met with suspicion by the other nurses, and contempt by Florence Nightingale, but still set up a hotel where her medical knowledge and cheerful disposition soon made her well known, and well thought of, by the British forces.

On her return to London, she was bankrupt but had made so many friends in Crimea that a number of high ranking officials paid off her debts and held various (mostly badly run, financially unsuccessful) fundraisers. During her life she continued to be a minor celebrity in London, and although her offers to help with military medicine were continually rebuffed, she was befriended by the nephew of Queen Victoria and became a personal nurse to Alexandra of Denmark, the Princess of Wales.

In the last fifty years there has been a resurgence in respect for this remarkable woman who travelled alone into a war zone after her requests to help the official teams were declined, who would carry hot tea and bandages onto the battlefield to revive the wounded. She was posthumously awarded the Jamaican Order of Merit, and has been a feature of the English National Curriculum since 2007.

*Mary Seacole: The Charismatic Black Nurse Who Became a Heroine of the Crimea by Jane Robinson